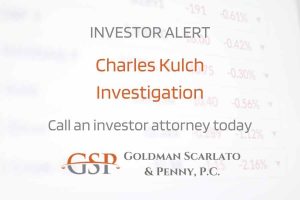 The Goldman Scarlato & Penny PC law firm attorneys are currently investigating Charles Kulch (also known as Charles Chester Kulch) on allegations of over-concentrating customers in illiquid, risky, and high commission products including non-traded real estate investment trusts and variable annuities according to an administrative complaint filed by the Secretary of the Commonwealth of Massachusetts. Investors who would like to learn more about the  Charles Kulch investigation are encouraged to contact investor rights attorney Alan Rosca or one of his colleagues for a free case evaluation and discussion of potential options, or to provide any useful information. Call 888-998-0530, via email at rosca@lawgsp.com, or through the contact form on this webpage.

Charles Kulch Under Investigation by the Massachusetts Securities Division

In June 2017, the Massachusetts Securities Division began an investigation into Next Financial Group and broker Charles Kulch in connection to a phone call from a Massachusetts retiree investor alleging he did not fully understand the nature of the alternative investments sold to him by Kulch, as stated in the administrative complaint.

Allegedly, Kulch recommended and sold hundreds of non-traded REITs to Massachusetts investors for nearly ten years. The complaint further alleges that many of the sales were unsuitable and exceeded Next Financials’ liquid net worth concentration.

Between 2010 and 2015, Kulch allegedly processed more than 300 REIT purchases in the accounts of over 160 Massachusetts customers in addition to allegedly processing at least 51 non-traded REIT transactions, according to the complaint.

In addition, Next Financial Group allegedly processed multiple simultaneous transactions for 48 of the 51 non-traded REIT transactions in a customer’s account without accounting for the reduction to the customer’s liquid net worth that occurred for each transaction, the complaint states.

As alleged in the complaint, Kulch and Next Financial incorrectly calculated the percentage of a customer’s liquid net worth that each non-traded REIT purchase represented.

As a result of the alleged misconduct, Next Financial was fined $425,000 for failure to supervise the sales of REITs.

In addition, in 2011 the New Hampshire Division ordered Charles Chester Kulch to cease and desist and pay a fine of $140,000 for failure to supervise the dissemination of seminar invitations containing inaccurate information.

Next Financial broker Charles Kulch was registered with the firm since October 2006 and remained there until June 2020, as reported on his Brokercheck page.

Between July 2006 and September 2020, Kulch paid investors nearly $1 million in settlements according to his FINRA Brokercheck page.

Another customer was issued a settlement in May 2016 on allegations of unsuitability and breach of fiduciary duty, among other things. The customer received a settlement to the tune of $525,000.

Similarly, in April 2016, a customer alleging unsuitable recommendations, among other things, received a settlement of $150,000.

A customer who filed a dispute alleging market losses and suitability, received a settlement to the tune of $100,000 in July 2006.

Charles Kulch has multiple pending customer disputes on his Brokercheck page alleging unsuitable recommendations of registered, non-traded real estate investment funds. The four disputes were reportedly filed between August 2020 and December 2020 and all four disputes seek unspecified compensatory damages determined by NEXT Financial to be at least $5,000 for the alleged conduct. As of the date of this article, all four disputes show as pending.

Finally, it is important to note that, as of the date of this article, there has not been a finding of liability as to the complaints or allegations mentioned in this article, unless otherwise indicated. Any reader should also read the original sources hyperlinked in this blog for accuracy, including any BrokerCheck report and/or record of any disciplinary or regulatory action. Those sources are incorporated by reference into the text of this blog, and are the governing materials in case of any inconsistencies or typos in this blog.

Concerned About Your Investment with broker Charles Kulch?

The firm takes most cases of this type on a contingency fee basis and advances the case costs, and only gets paid for their fees and costs out of any money recovered for clients. Attorney Alan Rosca, a securities lawyer and adjunct professor of securities regulation, has represented thousands of victimized investors across the country and around the world in cases ranging from arbitrations to class actions.

Investors who are concerned they may have suffered a loss with Charles Kulch may contact attorney Alan Rosca for a free no-obligation evaluation of their recovery options, at 888-998-0530, via email at rosca@lawgsp.com, or through the contact form on this webpage.